The long run that wasn’t. I knew this week and weekend’s running plans were going to be woefully undermet at best and more likely a complete lost (what? lost? me? Noooo…) cause. Not to be deterred or disappointed, with our trip to Mazama in the Methow Valley I knew there would be some kind of cross-training involving water – the soft, fluffy fun frozen kind. Snow, sun, and all things related to the two are everywhere ‘over the pass’ and we took advantage with a mid-day 2:22, and a whopping 285 feet of elevation cross-country ski session along Jack’s Trail in the Methow Valley. 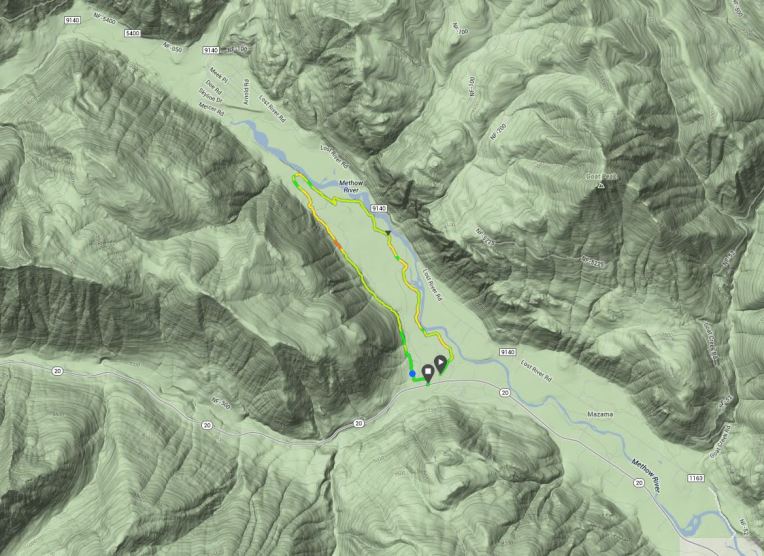 “It all began in the early 1970s when Sun Mountain had just opened. Jack Barron decided to promote skiing as a way to drum up business during the slow winter months. Barron scouted out game trails that would double as ski trails, and in 1974 arranged for Seattle residents to come to Sun Mountain by bus for a weekend of skiing. The weekend of the event, there was plenty of snow, but it had frozen, creating an unbreakable crust on the surface, terrible conditions for skiing. Despite treacherous driving conditions that saw the bus arrive at 3:00 a.m., the skiers were not deterred. They raved about the ski terrain, the scenic beauty and the gracious lodge. The whole group signed up for the next trip the following year.

The MVSTA was originally the Methow Family Sport Club. The organization was created in 1977 and designed to maintain ski trails in the valley. Sun Mountain brought in Don Portman, a certified ski instructor, to operate a ski area at the lodge. Portman cleared trails, marked them and taught lessons in the winter months. He still runs the ski school, but the trails are now groomed by MVSTA.

During those years, other areas in the valley were developing trail systems, and Jay Lucas was hired as the first, and so far only, executive director of MVSTA. In 1983, MVSTA received its first permit from the US Forest Service to charge fees to support cross-country trail grooming. Skiers were willing to pay to use groomed trails. “That led to the organization thinking about expanding and refining the existing trail system,” says Lucas. Today, MVSTA operates and maintains 200 kilometres with five Piston Bullies, four alpine skidoos, and six full-time and six part-time groomers. The volunteer ski patrol, all in radio contact, check for passes along the entire system.

From its humble beginnings as a ranching valley, the Methow Valley has grown to become the second-largest Nordic ski centre in North America. But wait, back to Jack. As it turns out, Jack Barron, the original owner of Sun Mountain, is not my Jack of Jack’s Trail. Jack Wilson is. Wilson helped build the North Cascade Highway, connecting the Seattle basin to the valley and fell in love with the Methow. He started a dude ranch after the highway was built, which is now the elegant Freestone Inn in Mazama. The Mazama Trail system is the remnants of Jack’s original horse trails.”

After a lazy morning, we made our way to the Mazama General Store which is basically the center of activity, meet up/(down?) spot, and fantastic local breakfast and lunch spot. The super tasty vegetarian quiche hit the spot and provided me fuel for the afternoon. We picked up our daily passes at the Methow Valley Ski School & Rentals at the Mazama Junction and drove up Highway 20 to the Jack’s Trail trailhead.

I learned setting up shots while cross-country skis is far harder than setting up shots while running. It’s not that it’s hard to find interesting, beautiful, or inspiring scenes and vistas to shoot, it’s that you’re on skis and everything just takes a bit more time. Or maybe I’m just not very good at cross-country skiing and that’s why it takes longer.

A great cross-training day left me sore in places that aren’t normally sore after a good long trail run. 300 vertical feet doesn’t sound like much, but is surprisingly hard! Gravity+skis+downhill slope=easy. Gravity+skis+uphill slope=hard (but fun!) We finished out the night by fixing hot pot for dinner and devouring raspberry cobbler and Husky vanilla bean ice cream for desert. It was a wonderful My Day weekend, cross-country skiing, relaxing by the fireplace watching snow fall and watching the dogs play (and bark) with my gracious family!

This site uses Akismet to reduce spam. Learn how your comment data is processed.