Tiger Mountain State Forest. We’ve been here before and even on these same trails, just with not as much snow, which kind of makes it a completely different trail. This 10.2 mile, 2,600 feet of vert and 3 hours and 11 minutes loop this past Sunday 02/23/2014 was for the most part all in snow – and it was fantastic! 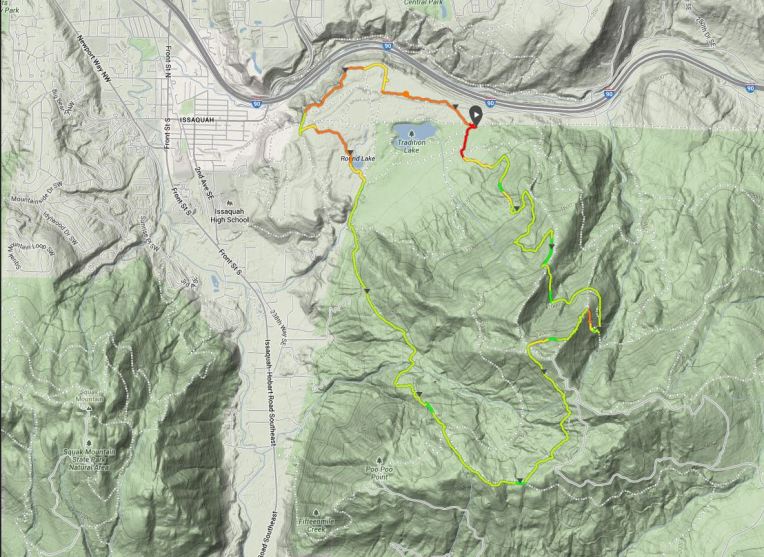 We left mid-day after wavering whether we’d run through the city or through the Issaquah Alps, not knowing at all that there would be snow, although thinking back on it now we probably should have expected it since there was lots of weather news about new snow in the Cascades. Turns out pretty much the entire run would be through snow even though it was all rain from the parking lot up through the first half mile when the wet trail showed a light dusting which quickly turned to an all white landscape. A mile in, snow was everywhere and the rain had slowly turned from drops, to a rain/slush/flurries mix, to an all out snow and as we ascended the landscape turned to an even more winter wonderland.

We followed my ‘lost’ route from a month ago and the trail disappeared, showing itself only from footsteps and tramped down snow from those before us earlier in the day. We followed somewhat blindly, although I recognized bits and pieces of dislodged snippets and vignettes clipped from my memory sans snow. Constantly back-checking the zip-locked map that was pretty much permanently in my hand probably helped to soothe the nerves of being lost in the snow miles from our car wearing only running tights, wet shoes, wet gloves, two wet light shirts and a light rain jacket which was already soaked through.

Continuing up and then up some more, the snow grew deeper, in some places as little as 6″, but we found our way and after topping out at 2800′, we quickly worked our way back down where to where the snow had receded and the trail turned to a wet, sloppy, muddy path. Basically the trail had turned into a small stream, but by this time there was no use avoiding the water so we trimmed through with no abandon.

If it’s anywhere near as captivating as the past two runs there, I cannot wait!

This site uses Akismet to reduce spam. Learn how your comment data is processed.

#41 revolutions around the sun.